I was fortunate enough to chat with Jada Grindstaff owner operator of Dead Key Collective. I have been sporting the Skelton Key patch on my TAC hat the last few weeks.  He is my most favorite All American. A term for the 82nd Airborne. I asked him a few questions and here the are.

1). Jada, tell me about your background?

Screaming Eagle right..? haha-   Oh snap! Haha.  I was actually in the 82nd ABN DIV and then 5th SFG(A) as a parachute rigger.

2). What is the Dead Key Collective?

It’s kind of like the stuff that gets thrown in a trunk for years and makes no sense to anybody but you. To them it looks like junk but not to you because your memories are tied to these items. So when they open the trunk or the drawer it probably all gets pitched. You open the drawer and see things that they do not. That stuff that made you see those memories in your head….Kind of like that. Or…My wife and I bought a house from a single guy. Before him was the couple that built the house. They passed away and he left a lot of their stuff in the house. There were drawers full of keys that unlock only god knows. So they are dead keys. So now at my house I have a drawer full of dead keys. A dead key collective. So really it’s just a name that I came up with and I liked it enough to roll with it.

Yes.    First time I used a Glock was at a cool guy school in Florida.  I enjoy firing them. Colt is a great american name and I have nothing bad to say about anything they make.  My dad gave me a Rock Island 1911 when I returned from Iraq in 07, so that pistol will always have my heart even though it’s an inexpensive version of a Colt gun.

4). Can you tell me the meaning behind the Skeleton Key patch or would you have to kill me?

There is no meaning. Nothing means anything. Move along.

The Blackbird wingtips are awesome! Thanks man!  My brother loves the markings too. He has a patch and didn’t pay for it. Hippy move, but he’s about as far from hippy as you get.

I’ve heard Cav use it, too. Oh the silly games we play…..but really the airborne thing…riggers hold on to that one tight. Or at least I do. I used to say to myself “I may not be the most badass dude in the room but at least I’m airborne.”

Maybe sometimes I still say it to myself.

Oh yeah. Much love for Marines. Lots of memories on that subject. I’m glad I didn’t, but I almost joined the Marines 3 years before I joined the Army.

9). What else can we look for from Dead Key Collective?

12). Operation Market Garden. What do those words mean to you?

Hard men doing hard things. Grateful for every single one of them.

13). So, I know you draw, play the guitar, and have jumped from a perfectly good airplane. What other special skill sets do you have besides being a awesome husband and dad?

There is no such thing as a perfectly good airplane! 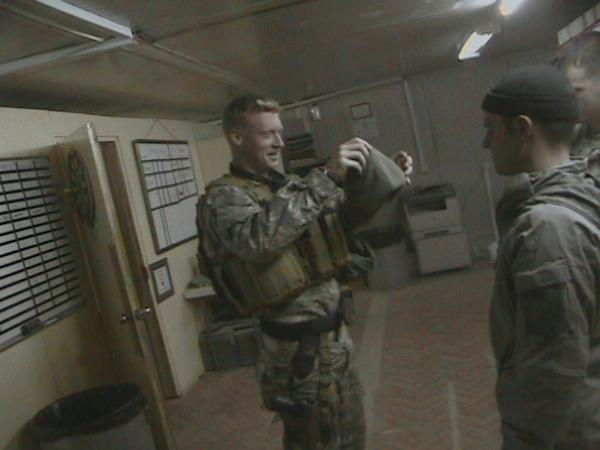 I know my way around a restaurant. I run a store in Mascoutah, Il. jeffersonsrestaurant.com We serve hot food and cold beer near Scott AFB, Il and have been in this location for 6 years.