I am a fancy man.

One of my close friends is a Green Beret. Doug is truly a fancier man than I will ever be.  We both have Rolexes and an appreciation for well crafted things. One day on social media Doug posted a picture of himself smoking a pipe.

Seeing this photo of my fancy brother from another mother brought back memories of my childhood. My father had a friend named Edward J. Skibba, he lived in Bossier City where I grew up. He was a retired Security Police from Barksdale AFB. I called him Skib. He owned a bar in Bossier and his home was in a neighborhood called Shady Grove in South Bossier. In this home he had an early 60’s style bar in the den and across from it a chair with a small table. On this table was a lamp and his pipe stand with several pipes and a glass jar with tobacco.

From my childhood there are distinct smells. The Barbershop, the Kickapoo Cafe that served me hot cocoa with a hot cinnamon bun after my bi-weekly haircut with my dad, coffee (that was not allowed since I was a youngster) and going over to Skib’s and the smell of his pipe smoke.

Thanks to Doug and these memories, I decided to purchase a pipe. I decided on a generic branded Savinelli as a starter. I’ve learned I need several pipes to build up a running rotation. I’ve picked up another pipe; a blue stemmed Dr Graybow. On a trip to Dallas I scored a vintage pipe rack with a glass container, much like the one Skib had.

I’ve looked on websites for the Savinelli and Peterson pipes. I’ve fallen in love with a Peterson that I found on smokingpipes.com  but it’s beyond my budget. I will have to wait awhile before I purchase a pipe as fancy as Doug’s. I shared this most fancy pipe with a special friend who then purchased it for me as a birthday gift. What an awesome surprise.

This birthday gift is super amazing. I receive my burled green Peterson Spigot Fishtail 150 with the sterling silver Army mount. The Army mount allows you to take the pipe apart for cleaning or travel even while it is still hot.It was inspired by soldiers that used shell casings to repair broken stems.

I post photos of my Peterson, its beautiful wood, burled on one side, the other a tiger stripe. The silver slightly tarnished from the factory. I purchase a Peterson silver polishing rag and a pipe pouch. One of my buddies I met through, GORUCK Kevin Poe (who is a beast), sends me some tins and samples of various tobacco. For those who are not familiar with pipes, they require a breaking in period, where you build a cake in the bowl that protects the pipe as you smoke it. Like with the other two pipes I start to break in the Peterson.

I might smoke once or twice a month. I prefer to do it while reading, with a coffee or a beer when I am on one of my off days. There is something very old world about holding a pipe. Packing the bowl, lighting, it’s slow and relaxing. The cleaning process equally relaxing.

Sitting on the porch, not wearing a shirt. (those of you who know me, know I hate wearing shirts) I am relaxed. I have a bowl packed with a sweet smelling tobacco from Poe and a cold Great Raft Reasonably Corrupt Dark Larger. My four pups are running around the yard. I think about my buddies Doug and Poe. Drifting back to memories of riding in my Dad’s Cadillac to get a haircut, breakfast, then to see Skib in South Bossier. Seeing his collection by that really comfortable chair, thinking I want to have a cool pipe when I grow up. Hoping one day I will be as fancy as Doug. 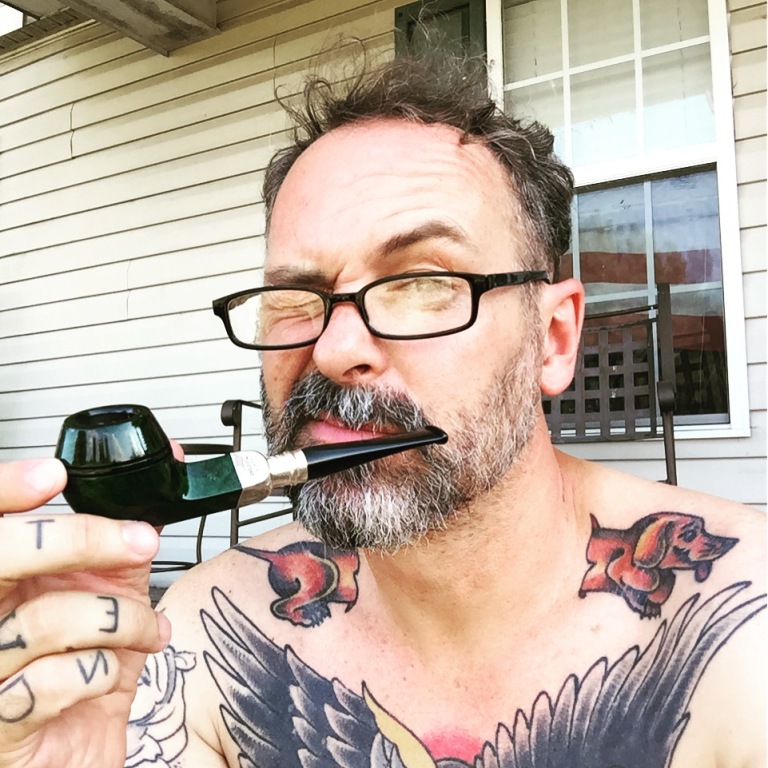